1. “I talk a good game but deep down inside I’m full of insecurities about why I’m single.”

If I’m real with myself I can say that I have a load of reasons why I’m single. It’s true! I know that on the outside, I’m stunning. I know that I’ve got a great personality, and quirks that are endearing. But I also know that I have a dark side. A side to me that can be very cold and cruel. I can be extremely nurturing, sexy, giving, emotive, give you best meal and p****y that you ever had in one night and look good doing it. And I can even make your parents think I’m a good girl even with this filthy mouth, lol. (Mine always fall for it.) But somehow I feel that that’s not good enough. Because if I really sat down and told you the string of bad luck (or bad choices, as an enlightened person would say) I’ve had with relationships, you would wonder, maybe as much as I do, what is wrong with this picture?

Wait. I’ll tell you what’s wrong. Firstly I’m not clear on how I wanna do this post. Should I actually list what single girls are really feeling but are afraid to admit? Or should I just write? All I know is that I wanna come from the heart on this one. But then, when do I ever not?

This weekend has been enormous in terms of friendships and confessions. I felt the need to kick someone out of my life, because they just didn’t get that I don’t trust them after what they pulled here. We just didn’t share the same values when it comes to courtesy, respect, and common sense. They kept persisting and grew irate when I wanted to put boundaries on the friendship so finally I just blocked his number.

Then, I reconnected with a friend who actually told me that for years he had a strong sexual attraction to me, and said that’s why he DIDN’T really want to come over, chill alone, etc. Even though he could have totally taken advantage of the situation, even could have led me on if he wanted to he chose to exercise some self control. I used to have a huge crush on him a few years ago, so that coupled with my recent desire to have intimacy, fall in love, and be all cuddly, and just plain horniness, I would have been easily led I’m sure. I respected the fact that he didn’t see an opportunity for sex and just jump on it. That to me is a trait of a responsible human, a real man. In addition to that, the fact that he told me  that when he didn’t have to  is the character of a real friend.

It made me raise the bar, and that’s when I told my other “friend” who was so selfish that he couldn’t see past the tip of his d***, to kick rocks.

I had another situation where I got a text saying “Are we friends?” from someone who just a few weeks ago I invited to happy hour and he all he responded was “Nah I got plans.” He’s usually not that short. I brushed it off though.

He continued, “If we’re friends I need to be real with you.”

Wow. This type of thing seemed to be happening all too frequently in the past few days.

He confessed, “You hurt my feelings and now I don’t even know what to say to you.” 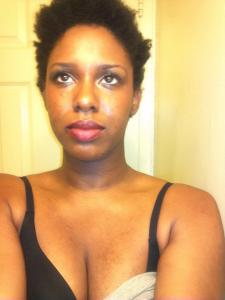 I'm hard on the outside but soft in the center.

I don’t know what it was but I think I’ve learned to not try to figure out things over a text message, and just wait until they can explain it fully over the phone or in person. I repeat: never try to “text” an important conversation. When we got a chance to speak I realized that there were things that I had done that were probably a result of some way deeper issues that I had with this person, and with myself.

And it let me to blog this right now, because I think I was still hurt by the bittersweet words this person said to me after I inquired about the “definition” of our relationship. (We had sex a few times, expressed our feelings, you get the picture.)

His words, “I’m not ready for a relationship right now, but if I were, you’d be someone that I’d want to be with.”

Through drunken tears I silently made the decision that any affection I had given him, friendly or more than friendly, had to end immediately. I swore I wasn’t gonna make the mistake again of giving it up with no guarantees.

I definitely did again. But then you read my blog so you know that.

The point, is hurt people hurt people. Sometimes without even realizing it. And I can’t tell you how happy, touched, and even honored I was that this man would confess to me that something I did hurt his feelings. I didn’t have to chase him down, I didn’t have to wait 3 months of just not hearing from him, like I have to do with even some of my girlfriends (see my last post Dumping Friends.) True, I didn’t know there was a problem, and he didn’t have to tell me, and so I commend that. Besides, it shows that he cares, and I’ve made that mistake before of cutting people off without telling them why. It sucked when they pointedly told me me how immature that was. I make it a point not to do it again, I still slip sometimes, but I’m gettin’ better at being open and honest. And my testimony to all this?

I have only ever gotten the BEST results when I’ve kept it 100% real. Vulnerabilities and all.

This is what this single girl never says, and that’s this: I’m scared. I’m scared that I’ll be alone for a really long time. I’m a little bit nervous that someone won’t recognize all of the wonderful things that my friends see in me; that I recognize in myself. I sometimes think that I’ll end up rich, fabulous, and alone, still not having had any children at  33 (when I planned to be knocked up by 29) and continuing to make all the same mistakes that I thought I learned from in my 20’s. You know, sometimes I only want my ex back not just because he was a great guy, but because maybe he was the only one who was foolish enough to love me. I know that when we broke up he said “Maybe you’ll find someone better than me,” while I cried 2 feet away from him, but sometimes I wonder if that’s even possible. And what I’m really scared of is that what I’ve convinced myself of is really the truth, is that whenever a man tells me something from his heart, he’s angling for something. And when a guys says he’s not ready to be with me, it means that no one will ever be.

You know, as I type this, an episode of Girlfriends is on where Ellis tells Joan “You’re so afraid of not having what Toni has (a wedding, husband) that you’re sabotaging us.”  I can’t totally relate to Joan. I know I’ll have a “happy ending” I’m just trying to figure out how the beginning and middle is gonna work out.

Funny how the Universe will bring us confirmation in the weirdest of ways.

So as of today, no more fear about the future. And no more thinking that when a guy stands me up, that it’s about me. No seriously, all that New Age crap about everything in your life is a reflection of you doesn’t necessarily mean that I deserve that shit. As they say in Singlegirldom, “His loss. Next!“