Fuck being a “modern woman” who can have sex like a man.

I should have just followed The Rules. You see, The Rules for dating are similar to other guidelines for social interaction, for instance, The 48 Laws of Power, or How to Win Friends and Influence people. These books helped me to understand that cool points are like currency, and surprisingly, you can quickly lose them by being too nice. You don’t gain them by buying someone’s friendship, or giving in to their every whim, or by not setting boundaries. In fact, it’s precisely the opposite. If you don’t set up very clear boundaries for  yourself and know what you want, respect is flushed down the toilet, and you get get shitted on.

This is the story:

I had a friend. Well, at least I thought we were. I knew him for a while, years ago, him and I would party together with mutual friends and basically have a great time. No sex, only dancing. There were crushes and all, I really liked one of his friends, but I generally was not attracted to this guy like that.  I trusted him though, I even had him over my place a few times, and I rarely have company like that. As for his name, we’ll call him D.  So, over time, as people do, we drifted apart. He had his relationship, I had mine, I was flying, so I had a job that took me all over the world. I think we were probably just a distant memory in the back of each other’s mind, until I got back in touch with a mutual friend of ours. Since I considered myself closer with D than all of them, I asked about him. Said friend, we’ll call him M, would tell me that he spoke to him every once in a while and that D even moved back to his hometown of Connecticut. Then I saw him on Facebook. I decided to hit him up. In that super-gushy, overly friendly way that I do (if you want another reason why it’s NEVER ok for a woman to approach a man from her past, you’ll have to stay tuned for one of the other posts. It was baaaad.) I was like “Hey! Where you been man? I miss you. We should totally catch up.” Not such a good idea. Even thinking about this important rule that I broke makes me cringe.

You see, I approached him first. (Rule #2 is Don’t talk to a man first.) I’m sure at the time, neither one of us was looking at the other as a prospective lay or relationship. I certainly wasn’t. But that was about 5 years ago that I met him. When I saw him again, (it was late night after one of my photo shoots, I model from time to time.) I noticed that he cleaned up nice. He grew up.  I was actually physically attracted to him, and plus, I was horny. I hadn’t had sex in several weeks, and only a few times at that: I had recently come off a celibacy run  (by choice) that lasted over a year.  So I was open to trying it out. I drank wine, we watched tv, talked, and then had sex. Twice. It was actually not that bad. In fact, it felt great!

I felt a little awkward afterwards though, because there was still no emotional connection between us strong enough to warrant me touching or cuddling. And I’m not used to just lying there like a cold fish after being so intimate with someone. That’s a weird line to walk. The tightrope between friendship, attraction, and sexuality. I realize I always inevitably end up falling. So, I broke another rule. I openly and honestly expressed my emotions (which was simply that I didn’t know what to do with myself and I felt extremely awkward after the sex), not in a clear and concise way that men can understand (men are stupid, but I love them ;)) but in a long winded, “not sure what I’m really trying to say” kind of way. It’s always as a result of being too nice that I end up tripping up over my own tongue. (Thus I ended up breaking too many rules to count. #4, 7, 15, and 19.  By going all the way to his place at the last minute late at night made it way too easy for him, and I rushed right into intimacy with a man whom I barely knew, even thought I thought I did. Not to mention the one about opening up too soon and pouring your heart out.) 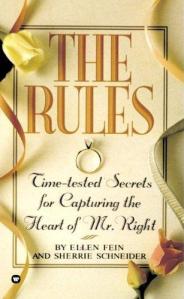 The truth is, while he had stamina and a great package, I need sex to have something emotional to back it up, or it just ends up feeling, well, empty. I didn’t know how to say that without feeling like a bitch “I STILL don’t have any feelings for you! So don’t touch me.” Now don’t get me wrong.  I didn’t think that having sex a few times would change my feelings for him. And I certainly don’t believe he gave a damn either way about how I felt about him. (See, there’s no reason why a woman who respects herself would put herself into this situation. Oh God, thank you for learning!)  I just WANTED the type of connection that I had with my ex. Preferably I either have sex with someone I love or have a one night stand (and typically those require I never see the person again. Now I’ll settle for having absolutely no attraction to them whatsoever, besides that quick stress reliever). The whole “fuck buddy” thing just totally confused me. I didn’t know what to do with myself. I should have just bounced.

Nevertheless, we talked about it, and he was understanding, but it wasn’t satisfying for me. I knew that I wanted more than the empty sex we had just had. Not from him, just for myself. Still, we remained cool.

He eventually ended up coming over for a holiday gathering, spending the night with no sex, then spending the night again a few days later and I couldn’t help myself. (I was really horny, plus I knew it wouldn’t be a waste of time because it would be good.) But something funny happened….He pulled a reverse Jesus and DISappeared like a thief in the night.  (You know that verse in the Bible about Jesus’ second coming surprising the hell out of you like a “theif in the night?” Well, I was just as shocked.) When I woke up, he was GONE. He texted me later that day and I said “Did you say bye when you left or did you just BOUNCE?” He tells me he didn’t wanna wake me, and that he had morning breath and didn’t wanna offend me. His exact words: “My mouth was dirty.” I hate talking about bodily functions so I tried to ignore that part, but I told him that he didn’t have to be all up in my face, but he could have at least said goodbye. From the door. (Should I have to explain this to a grown ass man?) Me: “I woke up and was like damn.”  After that text, I got no response. Now mind you, before that night we had made plans for later on in the week. He forgot them. Didn’t hear from him until the day after we were supposed to go out. Of course, after the stunt he pulled, I was no longer interested in seeing him again. Can you say “Nignore?”

Basically, none of this would have happened if I had stuck with one exquisite rule that Millionaire Matchmaker tells all her clients:  No Sex Before Monogamy! And I add to that: Do not fuck your friends! Friends do not get benefits unless friends put in WORK. Then they’re not friends anymore. They’re boyfriends.

I can tell you countless stories of times when I rushed into sex in my younger days, before my first serious relationship, but it wasn’t always this confusing and hurtful. A good friend of mine said that’s because when you’re young and just having fun, you can turn your emotions off. But now I’m older. (I’ll be 27 on December 26th!) I’m almost 30. I’ve seen my single female friends at 30 and older, and they all seem desperate. I want to be settled by the time I’m their age. So I’m doing things differently now. After I broke my vow of celibacy of 1 year when my long term relationship ended, this is the second guy who I allowed to be a “beneficial friend.” You see where it got me. What can I say? I’m not ashamed of being old-fashioned. Besides, I think there’s a line that runs from my vagina straight to my heart. And from now on, like a tightrope, I plan to walk it without falling.

7 thoughts on “Friends, But No Benefits”